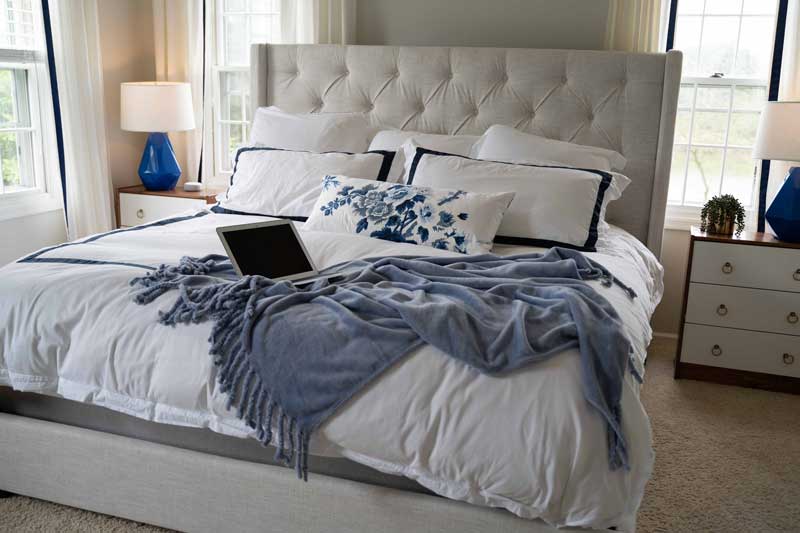 I had lived in the same house for seven years, and it was only when we were packing up to move to our new home, I realized that we had had the same décor in our main bedroom since we had moved in. This included custom pendant lights and lampshades, scatter cushions and throws, ornaments, and wall hangings. We had purchased some new bedding at that time, but the overall look and feel of the bedding always remained the same.

It was then that I realized that I had been stuck in a design rut, comfortable with the room and color scheme, and to be frank, probably a bit lazy in coming up with ideas to make changes.

A fresh new house seemed like the perfect opportunity for a fresh new design.

My previous room was decorated when I was going through a “duck egg” phase. Scatter cushions, lampshades, throw, and dresser were all the same hue of duck egg blue. When I told my husband my plans to re-design our room for the move, he confessed he had grown completely tired of the color scheme.

In looking for new ideas, I realized I was drawn to a neutral, natural palette with a Boho vibe, which is very in at the moment. What I also like about a neutral palette is that it is easy to build on and change small pieces to update the space. Being seven years older than when I had decorated the previous area, this more neutral design also felt more mature and calming and in keeping with where I currently am in my life.

Out With the Old, In With the New? Instead, Repurpose the Old

Firstly, moving is expensive. There is a deposit on the new house, payment to movers, new furniture for the new spaces; it can quickly add up. That is why I was very aware of what we already had and how they could still be used in the new space.

Instead of throwing out our old headboard, we sanded it down and gave it a fresh coat of paint. DIY projects aren’t for everyone, but they are a great way to save some money that can be used to purchase other new pieces. I believe that there is simply no point in throwing something away that can be easily repurposed. Yet for others, it may feel sensible to employ a full-storage service provider (like Boombox Storage), for a hassle-free and out-of-home storage solution. To each their own, I guess!

My husband is also not a fan of our current bedside tables; however, they fit in with the new color scheme, and I convinced him it was not a necessity to change those out immediately.

We also found a fantastic Persian-style rug in our storage unit belonging to my in-laws. It had shades of deep red and blues and cream colors, which would add a much-needed pop of color to the very neutral space. We had it professionally cleaned, which, given the size of the rug, was substantially cheaper than we would even have been able to buy a new one for. That then became the focal point of the room as well as our design aesthetic.

Once we had moved in, the fun could really start, and the shopping began. Something I really thought was important, and which I hadn’t considered before, was how the use of different textures can make such a big difference to a space. We love crisp white bedding, but it can often feel flat. We found new bedding that, while crisp and white, had a textured pattern sewn in, immediately elevating it. We paired this with plain square light tan scatter cushions and white rectangular scatter cushions that had a unique woolen braided design. The combination of different patterns and textures on the white elements, with the plain fabric on the colored cushions, ties in perfectly.

We kept our existing lamps and simply changed out the lampshades. This is another quick and inexpensive way to make an immediate change. A large mirror and some rustic photo frames helped add some interest to the walls.

The last thing to tie the room together was curtains, again, something that is often overlooked. The windows in the new house require extra length and extra width curtains, making the hunt for the perfect curtain extra challenging. Our existing curtains were grey, and while that worked with the white walls of our room, it clashed with the neutral theme of the room. We eventually found the perfect light tan curtains that matched the scatter cushions, and our master bedroom makeover was complete.

While it was difficult to find some of the pieces I wanted, the time I spent shopping was well worth it, as I now have the tranquil retreat that I wanted. The importance of a comfortable master bedroom should never be overlooked.

Things We Need to Know About Home Automation